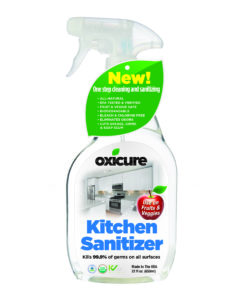 s has been working on a new product, Oxicure, for quite some time now and it is FINALLY ready to be released to the retail market! Oxicure is the only Ready-To-Use retail Paracetic Acid (PAA) product on the market. It is an all encompassing sanitizer that can be used on any hard, nonporous surfaces, including fruits and veggies!

Oxicure is a one step sanitizer- meaning you spray Oxicure and after 60 seconds, that surface is cleaned and sanitized. It is EPA tested and verified, Kosher approved and USDA Organic. Oxicure cuts grease, grime & soap scum, eliminates odors, is all natural, bleach and chlorine free AND kills 99.9% of household bacteria. Stay tuned for updates regarding retail locations and other information!
By MakenzieNewsComments Off
Read more...

“It doubles the number of shipments we have and allows us to develop more products for Wal-Mart and strategic retailers across the United States and globally,” Meshri said.
The move by the specialty chemicals manufacturer, which is based at the Tulsa Port of Catoosa, follows the acquisition of Winston Chemicals of Tulsa and formation of a new division, ARC Products. The acquisition was completed in mid-July. Neal Zahn, president of Winston Chemicals, will join ARC. The transaction was seven figures but no other details were disclosed.

Through its history, products produced by ARC were not seen by the public, Meshri said.

“Yet people benefited from them on a daily basis,” Meshri said.

The chemicals produced at ARC’s plants are used in products such as IPods, clothes dryer bars, pre-soak at the automatic car wash, and batteries. However, the purchase of Winston Chemicals – the first acquisition by ARC – ushers in a new era.

“This is a great opportunity for us; it is the first time our name will show up on a label,” Meshri said. “When Wal-Mart starts increasing their orders, that will create a big change.”

Wal-Mart will become the prime customer for ARC. The merchandise, which includes septic tank pellets and cleaning products, ships to 3,842 stores; it will soon ship to the retailer’s 42 distribution centers instead. Online sales will also be introduced. Meshri said revenue potential is near $10 million annually. Currently, the sales are about $2 million each year.

“With the door opening to Wal-Mart, we see the potential to supply products to other big-box retailers,” Meshri said.

With the acquisition and foray into the retail market, ARC brings knowledge of chemical manufacturing and world-class processes such as ISO-9001 and ISO-14001 into the arena, said Robert Adams, vice president of Business Development and Engineering. ISO, or International Organization for Standardization, is the world’s largest developer of voluntary international standards.

“Having the ISO rating opens doors for us,” Adams said. “A lot of manufacturers go through the process and we have a serious quality assurance business because of our work with semiconductors and high-end products.”

ARC has spent more than $400,000 on lab equipment and instrumentation as it seeks to grow its research and development arm, which employs 15 people. ARC deals with purity levels down to the parts-per-million and parts-per-billion level, so the infrastructure is mandatory.

“And, just because Wal-Mart buys and sells stuff does not mean they do not have programs to develop products,” Adams said. “They have R&D programs in place.”

ARC was founded by Dayal Meshri in 1987. He remains president and CEO. ARC, which marked 25 years in business last year, has grown into a manufacturer and supplier of inorganic fluoride chemicals as well as industrial and institutional products.

By adminNewsComments Off
Read more...